The Global Fund’s 5th Replenishment period has just kicked off with pledges from most of the major wealthy countries of the world. Overall, the news is positive:  world leaders showed up to the pledging conference and raised more than ever before to fight AIDS, tuberculosis, and malaria in what all recognize has to be only the start, not the end, of mobilizing resources for the Global Fund over the next three years.

According to the Global Fund Secretariat those pledges totaled $12.9 billion. But Health GAP is concerned it will not translate into nearly that much funding for programs. Even more worrisome is the fact that the Global Fund replenishment goal of $13 billion was adopted despite the fact that even $13 billion leaves a 20% gap in what’s needed to adequately address AIDS, tuberculosis, and malaria over 2017-2019—even after accounting for domestic and other international resources. 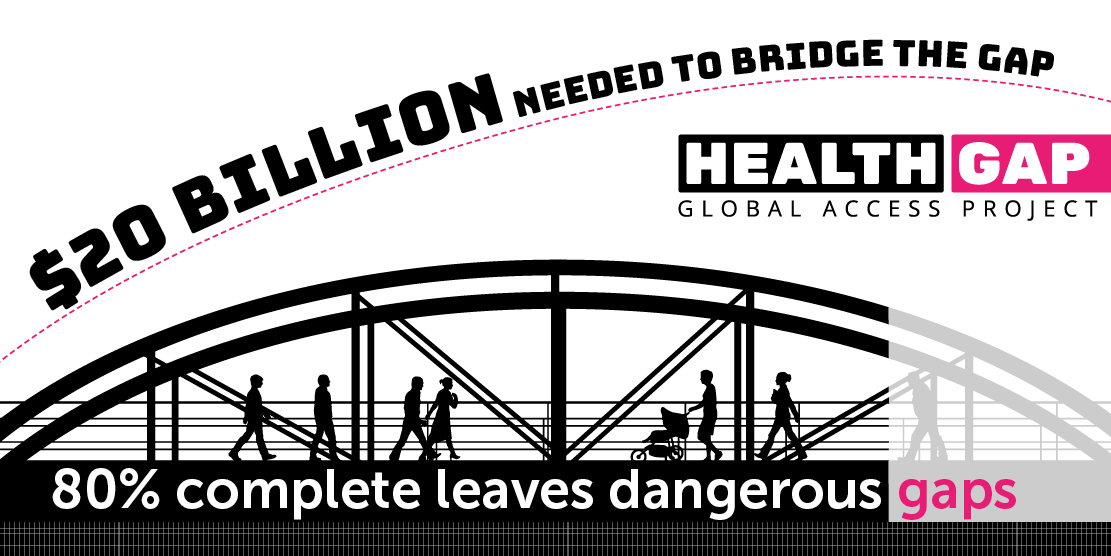 In light of this, we have three questions that urgently need answering:

1. What if the Global Fund’s new exchange rate formula for recalculating pledges is wrong?

In a change from prior practice, pledges for this replenishment that were made in national currencies were not converted into U.S. dollars based on the current exchange rates. Instead, the Fund has created a formula, which has not been shared publicly, for recalculating these pledges based on a multi-year historical average of exchange rates.

At today’s exchange rates, we calculate that the pledges made total roughly $12 billion (see our preliminary analysis). However, applying the Global Fund Secretariat’s formula generates a total of $12.9 billion.

A particularly strong U.S. dollar means that some countries are making significantly increased pledges in their own currencies, but when converted to U.S. dollars, the value seems far less. Had they made the same pledges in euros or pounds or kroner a year or two ago, the equivalent dollar pledge would have been far higher. But perhaps this trend will reverse. The Fund makes the point that the current exchange rate of the day is arbitrary and undervalues the pledges — unless it doesn’t. This replenishmentis only three years long, running from 2017 until 2019. The dollar has been strong for at least 18 months and there is no guarantee when or how much the euro and the pound will rebound.

More importantly, the real question is what the funding will buy. In some implementing countries domestic currencies are especially weak, so they may see increased buying power for inputs such as wages and domestic goods. But where contracts for commodities like drugs are being made with suppliers in countries with relatively strong currencies, the opposite could be true. Increasing reliance on pooled procurement and purchasing in longer term, large volume orders to secure lower prices means orders will be placed sooner rather than later for the coming years. The exchange rates today may well be much closer to real buying power than whatever might happen to exchange rates later in the three-year allocation period. The bottom line is, we just don’t know.

After the most recent replenishment period, the Global Fund should know to be worried about this. Currency fluctuations had a significant negative impact on the Fund’s portfolio as currencies weakened between 2013 when countries made pledges and when the money was actually delivered or “encashed” to the Fund. Non-U.S. dollar pledge currencies fell by an average of more than 15% in assessments and the Fund was forced to engage in hedging strategies to avoid significant losses. Given this experience and the significant funding gap that already exists, why isn’t the Fund being a bit more conservative — leveling with donors and the world that there may still be a funding gap of far more than $100 million, even to reach the Fund’s own target of $13 billion?

2. How will we address the 20% gap left for this replenishment period?

Aiming for 20% less than what is needed for infectious diseases is not a plan for success. At an event preceding the pledging conference, Stephen Lewis, former United Nations Special Envoy and current AIDS-Free World Co-Director, reminded everyone that donors have essentially planned to fail by setting a Global Fund target at $13 billion.

At the Global Fund’s conference in Tokyo last December it was agreed that during 2017–2019 $97 billion would be needed for AIDS, TB, and malaria programs in Global Fund eligible countries to achieve the benchmarks the world has set out in the Sustainable Development Goals.

In a best case scenario of high growth, the Fund estimated that low- and middle-income countries could mobilize $41 billion themselves. An additional $24 billion is expected to come from other international sources and programs for a total of $64 billion in non-Global Fund funding that was likely to be available before the replenishment opened this weekend. 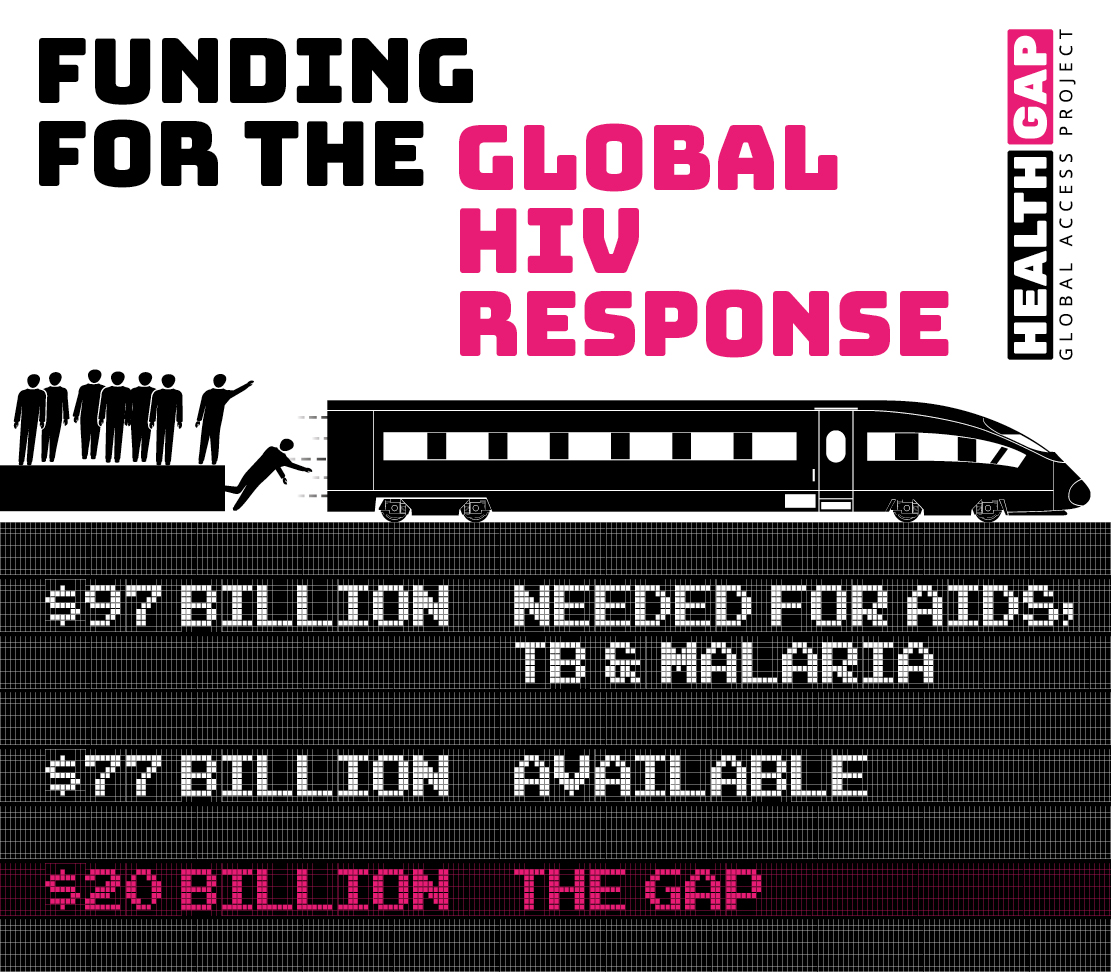 As donors celebrate raising approximately $13 billion, the question quickly arises — where will the additional 20% come from that’s needed to reached the targets they signed up for in the recent Sustainable Development Goals and United Nations Political Declaration on Ending AIDS?

3. Debt to health will help AIDS, TB, and malaria programs, but what will it mean for Global Fund country allocations?

In another change of practice from the past, the Fund has started counting debt swaps as pledges. This practice involves wealthy countries promising to write off sovereign debt of implementing countries in exchange for an agreed portion of that write-off being re-invested in AIDS, tuberculosis and malaria programs. This is, as the Fund likes to say, “real money” for the three diseases—allocated directly from national treasuries to public programs. But it means that amount allocated for debt to health ‘swaps’ will not actually flow into the Global Fund’s war chest to fight the three diseases and will not be included when the Global Fund calculates each eligible country’s allocated amount. Instead, it will “top up” what is available for AIDS, TB and malaria programs in a small sub-set of countries chosen for debt swaps, but across the board there will be less funding in Global Fund pots to support the programs approved by the Fund Board.

Germany has been the highest profile example of this — pledging 800 million euros, a significant increase from the past. But most of this increase – 100 million euros — will be in debt to health swaps that only reach the specific indebted countries. Spain has said it too would be pledging in part through debt to health.

In addition, we have serious concerns about decisions at the Fund that are pushing people in middle income countries out because their national GDP has grown, even if their personal income and access to health have not. When you cut through the bureaucratic speak, this decision is about one thing: rationing. And millions in need are not being reached.

These questions must be addressed if the Global Fund is going to turn this replenishment into success for communities.