The Global Fund’s 5th Replenishment period has just kicked off with pledges from most of the major wealthy countries of the world. Overall, the news is positive:  world leaders showed up to the pledging conference and raised more than ever before to fight AIDS, tuberculosis, and malaria in what all recognize has to be only the start, not the end, of mobilizing resources for the Global Fund over the next three years.

Come rain or shine, activists fight back at the High-level Meeting on Ending AIDS

It’s been a challenging but inspiring week in New York at the United Nations High-Level Meeting on Ending AIDS, where world leaders and diplomats gathered to approve a Political Declaration that will guide the global response to the HIV epidemic for the next five years.

[Brooklyn, NY] Democratic presidential candidate Hillary Clinton met with 20 representatives of the HIV/AIDS community at her campaign headquarters in Brooklyn today. The meeting was scheduled as a result of sustained political pressure from AIDS activists on Secretary Clinton and other presidential candidates. Activists presented a policy document that, among other key recommendations, asks every candidate commit to increasing U.S. funding in the global AIDS response by $2 billion by 2020. This commitment would double the number of people on treatment directly supported by the U.S. as part of a global plan to treat over 30 million people by 2020.

During the meeting, Secretary Clinton did not commit to these targets. However, after she was challenged by advocates, she promised to release treatment and funding targets for global AIDS programs. Activists have asked Clinton to release these targets within 30 days.

“It is crucial that the next president of the United States increases the momentum in the global AIDS effort by increasing funding,” said Hilary McQuie, who attended the meeting on behalf of the Health Global Access Project. “We are at a crossroads in the AIDS response. If we scale up access to treatment and prevention programs within the next five years, we will curb the spread of HIV and see the end of the pandemic as we know it by 2030. If we choose to continue business as usual, we will see rising infection rates and millions more preventable deaths in the coming decades.”

Delegates in the meeting also raised concerns about pharmaceutical prices and global access to medicines. Trade deals and intellectual property law have posed an immense threat to access to affordable generic medications in low and middle-income countries.  Activists requested that Secretary Clinton commit to stop the Trans-Pacific Partnership (TPP) and any other trade agreements which will restrict access to medicines, while also stopping U.S. pressure on India to change the patent laws which allow it to produce generic medications.

In response, Secretary Clinton reaffirmed her opposition to the TPP particularly on the grounds of its intellectual property provisions regarding pharmaceuticals. She also stated her support for India to produce and distribute generic medications.

Secretary Clinton is the first presidential candidate in this election cycle to meet with AIDS advocates. Senator Bernie Sanders had scheduled a meeting with the coalition, but has since indefinitely postponed the discussion. Donald Trump’s campaign staff has stated that they will schedule a meeting when they have a policy staff.

The next president of the United States could accelerate the end of the global HIV/AIDS pandemic. Scaling up investment on PEPFAR & The Global Fund during their first term could double the number of people on treatment worldwide from 15 million to 30 million by 2020.

What does each candidate plan to do?

What are we asking them to do?

We are asking every candidate to make the commitments needed to ensure that the world is on track to end the epidemic as we know it by 2030. To do this, the next president of the United States must commit to double the number of people directly supported by the U.S. on life-saving treatment by 2020.

Earlier in the campaign season, we and other global health activists asked every candidate to commit to this Presidential Pledge for a Healthier, More Secure, and AIDS-Free World.

In April 2016, we worked with domestic and global AIDS organizations to produce a consensus document entitled Revitalizing the United States Response to End AIDS as an Epidemic, which we shared with Hillary Clinton at our meeting with her in New York on May 12th, 2016, and with Bernie Sanders in San Bernardino on May 25, 2016.

In August 2016, we wrote a letter to Secretary Hillary Clinton as a member of the Ad Hoc National Coalition to End the AIDS Epidemic with next steps for her campaign.

How can you help?

There are a number of ways you can get involved.

1) SIGN THE PETITION – Tell Hillary Clinton we need her leadership in the global AIDS response.

2) JOIN THE MOVEMENT – If you are a student or young person, get involved with the Student Global AIDS Campaign.

4) DEMAMD LEADERSHIP – Ask the US presidential candidates to show their commitment by taking this pledge.

Towards Treatment on Demand For All 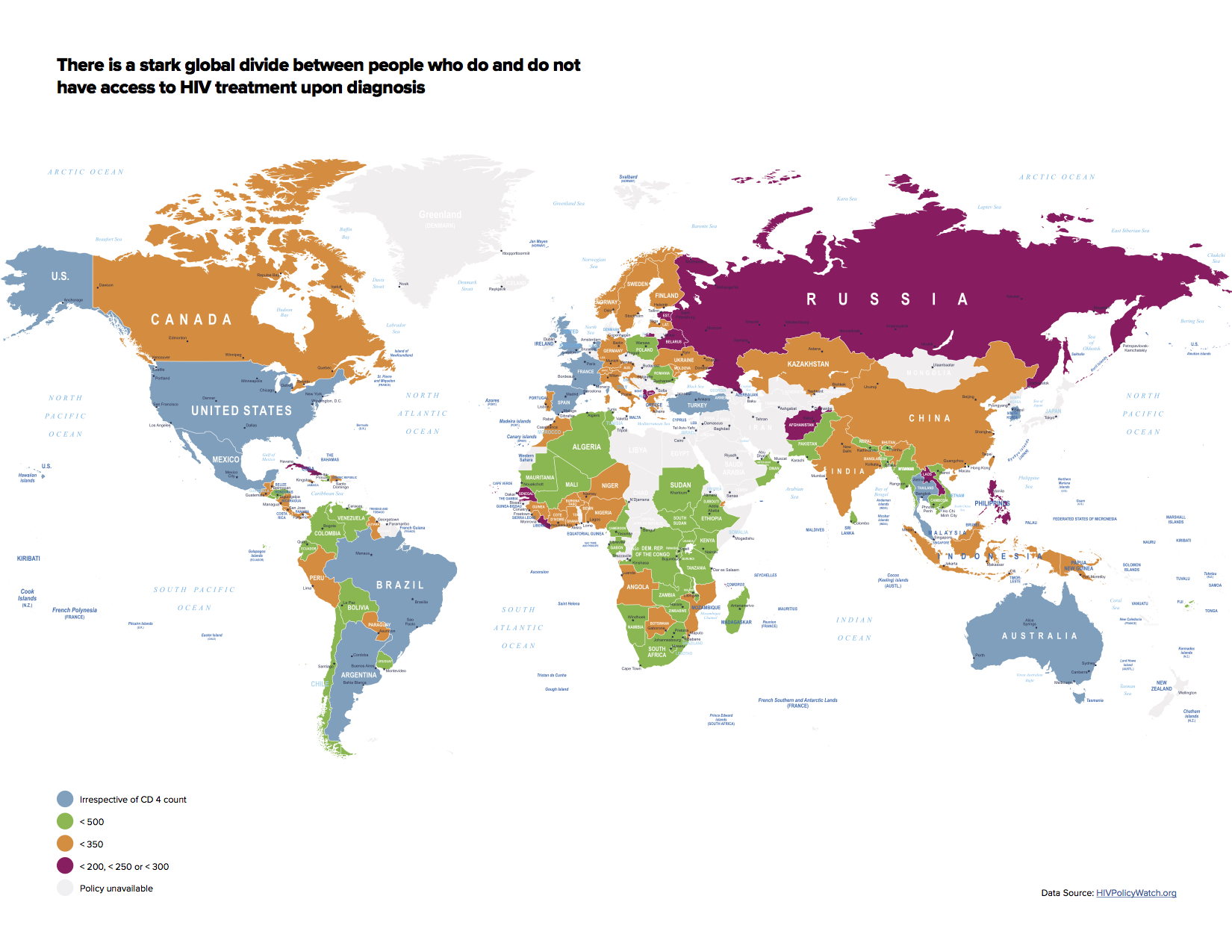 Health GAP and partners from around the world released an important analysis ahead of World AIDS Day entitled "Towards Treatment on Demand for All" showing that fewer than 1 in 10 people with HIV live in a country where treatment is provided to everyone immediately upon diagnosis. This is in sharp contrast to the clear scientific consensus that immediate access to treatment is required to save lives, halt HIV disease progression, and prevent transmission.

The World Health Organization (WHO) now recommends that all people with HIV be given immediate access to antiretroviral therapy, regardless of disease stage. Yet, the thirteen countries where "treatment on demand" is currently available represent less than 5% of the burden of AIDS-related mortality in 2014, and all are either high-income or upper middle-income countries.

The global target of ending AIDS by 2030 will not be achieved unless these disparities and inequities in treatment access are corrected. The report released on November 30th, 2015—drafted jointly and endorsed by a global coalition of people living with HIV, clinical providers, and activists—calls on governments and donors to bridge the gap between HIV treatment science and practice and adopt, fund, and implement access to treatment on demand for all people living with HIV.

Together with allies around the world, we are demanding that donor and implementing countries act on the science, by taking urgent steps to implement the new guidelines and commit to increase the funding needed to do so, by the UN High Level Meeting on AIDS in June 2016. We are committed to holding them accountable at the 21st International AIDS Conference in Durban, South Africa in July 2016.

This bold demand—based on evidence, human rights, and the moral imperative of health justice—is the start of a global challenge to ensure that HIV treatment policies and global funding levels reflect the science and practices that can end the AIDS pandemic as we know it.