Since 2009, Health GAP has been fighting alongside civil society organizations in Uganda for universal access to antiretroviral therapy for all people living with HIV as well as fighting to put an end to preventable maternal morbidity and mortality, unsafe abortions, and policies of exclusion and bigotry toward LGBTI communities and other marginalized populations. 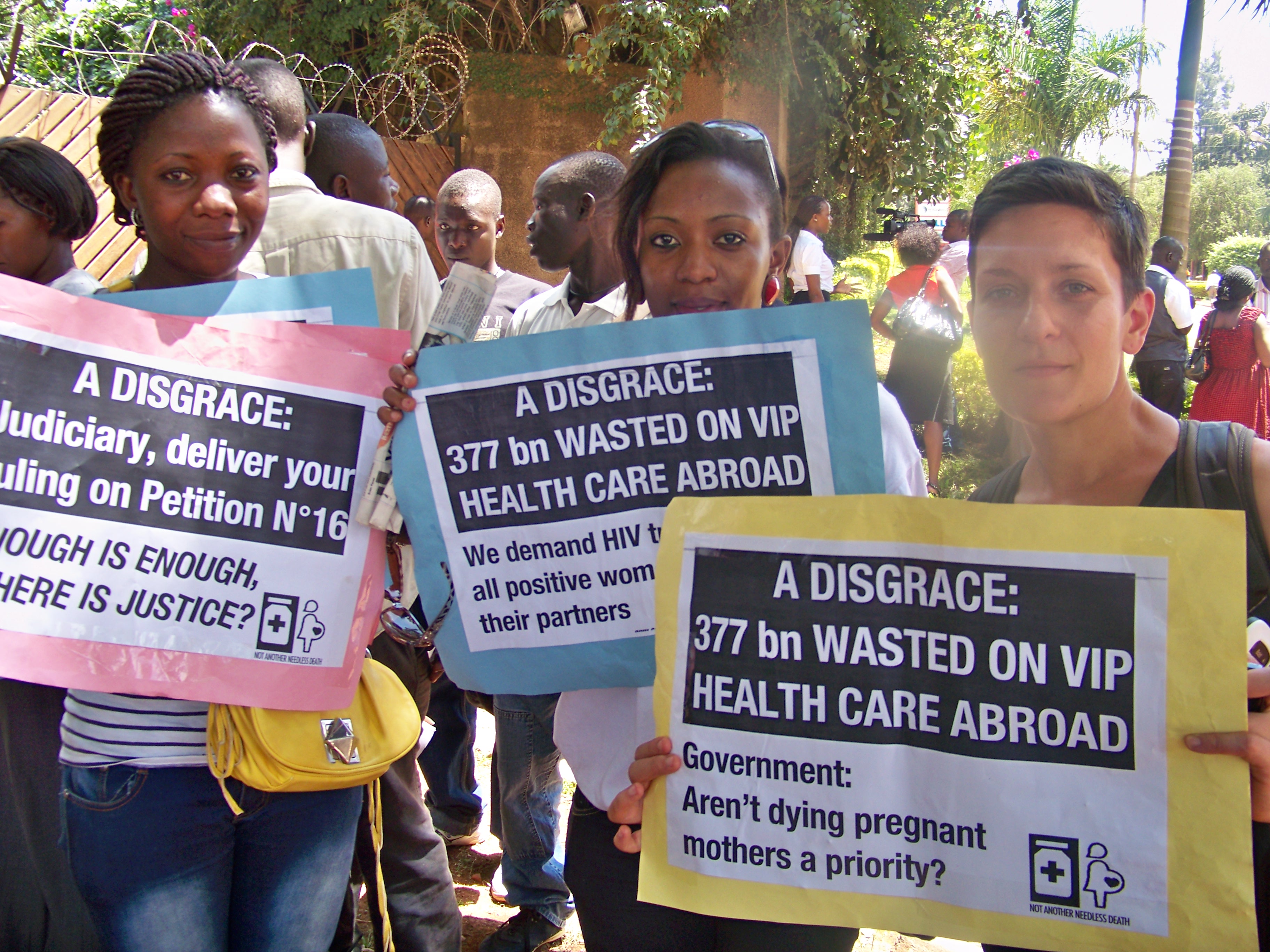 Health GAP and its partners are fighting for an end to the AIDS epidemic in Uganda, through advocating for acceleration of HIV treatment—with earlier, faster initiation—evidence based HIV prevention, urgent scale up of “Option B+,” and an end to deadly exclusion of men who have sex with men and other marginalized groups—all strategies that will help Uganda save lives, halt new infections, and cut costs.[1] While in the past Uganda was been lauded as a global HIV success story, Uganda is now one of a small minority of countries with generalized, mature HIV epidemics that are reporting rising HIV prevalence.[2] In Uganda, prevalence has risen from 6.4 to 7.3% between 2006 and 2012 and incidence is also estimated by Ministry of Health to have increased between 2005 and 2011. Importantly, Uganda is the only PEPFAR “Focus Country” reporting rising HIV incidence[3]—all other PEPFAR focus countries have consistently reported declines in incidence as well as prevalence in recent years.

One reason for these troubling trends is the fact that Uganda for years moved too slowly in scaling up lifesaving HIV treatment. In 2010 Uganda made headlines when PEPFAR pursued a disastrous policy in the country, of capping new HIV treatment enrollees--Health GAP helped uncover evidence of this decision, written in a memo to PEPFAR implementers in Uganda. The example of Uganda was the beginning of what Health GAP learned was a more widespread effort to slow down the scale up of life saving, high impact interventions, particularly HIV treatment. Health GAP wrote a letter to the Obama Administration calling for immediate course correction in the response; international protest and international media attention (see more media: here and here) also increased attention on the consequences of the U.S. government position. Thanks to this pressure, the Administration reversed course in Uganda, and then in 2011 committed to doubling the pace of treatment enrollment to reach 6 million people on treatment by 2013.

Uganda has also resisted investments in evidence based prevention—serodiscordant couples, sex workers, men who have sex with men and fishing communities have disproportionately high prevalence rates, but the national response does not target them with evidence based interventions. Advocacy by Health GAP and others has helped draw attention to this crisis—in September 2012 Health GAP and 13 other civil society organizations released a ‘Shadow Report’ during the Joint Annual Review of the AIDS Response, offering a 10 point prescription for change to end the epidemic in Uganda.

In the lead up to the 2011 Presidential and Parliamentary Elections, Health GAP and the International Community of Women Living with HIV/AIDS East Africa (ICWEA) hit the campaign trail and challenged candidates to commit to bold but feasible promises to tackle the epidemic. Through community mobilization, smart press work, and showing up at every possible candidate appearance, 4 of 5 of the major Presidential candidates pledged their public commitment to a civil society action plan against AIDS.

In 2011 Health GAP challenged the slow pace of treatment scale up in Uganda and the lack of investment in high impact prevention interventions by PEPFAR, sending a letter to AIDS Ambassador Eric Goosby calling for a massive shift in priorities and investments in the PEPFAR Country Operational Plan (COP) for Uganda for 2012. The 2012 COP was drastically rewritten, and now includes support for major treatment acceleration, Option B+, and increased investment in men who have sex with men, sex workers, and other marginalized groups.

Health GAP also advocates for an end to preventable maternal mortality—which kills 16 women daily in the country—as a member of the Coordinating Group of the Civil Society Coalition to Stop Maternal Mortality in Uganda. We support groundbreaking strategic litigation in the judiciary on maternal mortality, Petition 16 of 2011, filed by the Center for Health, Human Rights and Development (CEHURD). We have fought for major increases in recruitment of professional health workers, with an increase in their financial and non-financial remuneration, resulting in a victory in 2012, with a commitment by Parliament and the Executive to invest 49.5 billion shillings ($20 million) in recruiting 6,172 new professional health workers, with more than a doubling of the pay of doctors in Health Center IVs. This is more than a 25% increase in the number of professional health workers on staff.

Health GAP collaborates with LGBTI movements, fighting for an end to deadly exclusion and discrimination by advocating against the Anti Homosexuality Bill and working for a national AIDS Response that reflects evidence and epidemiology in Uganda. On Human Rights Day, December 10 2012, Health GAP worked with CEHURD and 100 other civil society organizations to support CEHURD in filling an urgent appeal with the UN Special Rapporteur on the Right to Health, asking that he launch an investigation into the likely health impacts of the Anti Homosexuality Bill, and that he inform the Government of Uganda of resultant violations of international human rights law if the were to become law.

Asia Russell, Health GAP’s Executive Director, is working on the ground in Uganda with Health GAP. To learn more about this work, please contact [email protected].