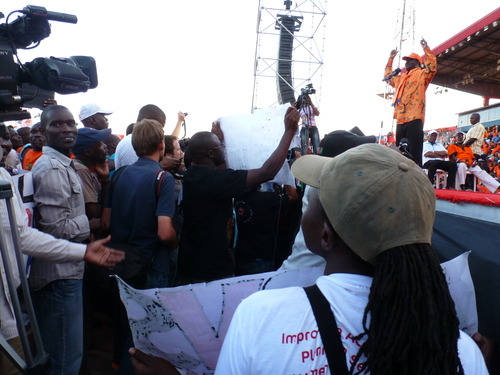 12 brave Kenyan AIDS activists, organized by Maureen Milanga as AIDS Law Project/Health GAP Fellow, and Jacque Wambui as a Health GAP / AVAC Fellow, birddogged Prime Minister Raila Odinga with help from HG Director of Global Campaigns, Paul Davis, at the final rally of the CORD Coaltion. The AIDS activists got the Prime Minister, the Vice President and the Minister of Medical Services each one-on-one for several minutes early during the rally and he committed to providing free Anti-Retroviral Treatment for all people living with HIV and 15% of the national budget toward health!

Activists then got front-and-center at the huge rally in Nyayo Stadium in front of 100,000 supporters and held up signs demanding free AIDS drugs for all. He took a look at them and quickly spoke in support of our demands. PLHIV in Kenya thank the Prime Minister for hearing them and agreeing to their demands.