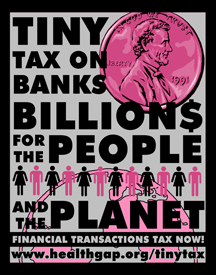 Health GAP has been working on the issue of "innovative financing", or finding creative new ways to pay for the end of the AIDS pandemic, since our early years.  Initially we pushed for the creation of the Global Fund to Fight AIDS, TB and Malaria, which brought together rich countries to invest in the fight against global health.  While far from perfect, the Global Fund is an innovative model for engaging in foreign assistance that incorporates the voices of the people directly affected from poor countries in the decision making process.

When Health GAP grassroots members would speak with decision makers about providing funding for access to HIV treatment, prevention and services, we would hear the same retort: "we don't have the money."  So Health GAP, working with others like National Nurses United and National People's Action, launched the U.S. Robin Hood Tax campaign, bringing together labor leaders, environmental justice leaders and grassroots organizing groups from around the country to demand a tax of .5% on speculative stock transactions that could raise up to $350 billion to end AIDS, fight climate change and fund jobs.  This grassroots campaign furthers the work of Americans for Financial Reform and International Policy Studies through local level organizing.

See this video explaining how you can join the Masked Money Movement to show your support for a Robin Hood Tax.

Check out a video from our UK allies about this simple idea.