Health GAP partners with grassroots civil society organizations in Kenya to expose and challenge the interests of government agencies and donors, advocating for increased transparency and accountability necessary to end the country's AIDS epidemic. 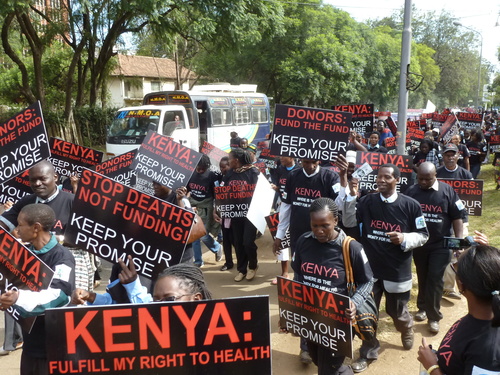 In 2008, Health GAP teamed up with grassroots advocates, including GROOTS-Kenya and their Home-Based Care Alliance of community health workers to survey people with HIV from across the country on what they wanted the Government of Kenya and PEPFAR to do in the coming years to stop AIDS. Health GAP then mobilised a team activists to successfully insert most of these demands into Kenya’s new National AIDS Strategic Plan (KNASP III), and the PEPFAR Partnership Framework, under development at the time. This was the first time HIV+ civil society groups had successfully pushed its way in to the previously closed, secretive PEPFAR processes at the country level, and many breakthrough victories resulted.

The campaign won agreements in the 2010-2014 PEPFAR Partnership Framework to increase the number of Kenyan health workers by over 6,000, and to pay and train at least 75,000 community health workers to speed up the stalled launch of Kenya’s Community Health Strategy.

After three years, more than 6,000 nurses have been hired, and the Structural Adjustment Programme relic of thousands of unemployed Kenyan nurses is no longer.

In addition, after annual mobilizations (see more), media work and lobby efforts, the government of Kenya has aggressively increased domestic health budgets each year to actually exceed the Partnership Framework funding levels. In June 2013, Parliament passed a 2014 budget that exceeded 2009’s baseline by 58.4%.

In 2009, Kenya was seen as one of the poorest performing Global Fund recipient country. Multiple greatly needed applications had been rejected over the course of several years. Health GAP was elected by Kenyan civil society groups to serve on the country’s Global Fund Round 10 application drafting group. After six months of CSO consultations, targeted lobbying and fighting to defend essential measures--and endless hours with the writing team hunched over laptops, Kenya’s application to the 10th Round of GFATM funding was approved.

At $345 million for AIDS alone, the grant is one of the largest approved by the Global Fund Board and Technical Review Panel. It came in the same round as an additional successful malaria application. Most of these Round 10 HIV funds are needed to close an urgent gap in antiretroviral coverage, but additional policies were pushed for and won by Health GAP with civil society groups, including break through funding to establish at least four syringe exchange programmes, as well as drop in centres with health services for sex workers and gay men.

Health GAP and partners mobilise to demand that donors and the Government of Kenya alike fully fund the fight, including a fully funded Global Fund, as well as increased domestic financing for health and HIV.

In advance of World AIDS Day, 2011, developments in HIV science made clear the game-changing benefits of earlier ART initiation and treatment-as-prevention (TasP). As Health GAP and other activists in the U.S. campaigned for an Obama Administration commitment to accelerate the pace of ART scale-up in advance of the 2012 International AIDS Conference in Washington DC, simultaneous efforts were underway to in Kenya to demonstrate to the public--and to leverage U.S. officials--that other governments were prepared to step-up the own pace in concert with the U.S.

Based on civil society demands and the hope for increased support for ART from PEPFAR, Kenya’s Hon. Minister of Special Programmes in the Office of the President Esther Mirugi committed Kenya and the National AIDS Control Council to more than double the numbers on life-saving treatment to one million by 2015, and to continue Kenya’s already strong commitment to increase domestic funding for HIV and health.

Obama Administration Officials have confirmed that bold measures like these from Kenya and similar actions by South Africa, Nigeria and Zambia all played a significant role the White House decision processes that led to President Obama’s pledge to extend ART to six million people by 2015.

During and after these breakthroughs, Health GAP and partner CSOs, along with experts from the Government of Kenya, were organising for aggressive updates to national ART guidelines, pushing for earlier initiation of antiretroviral therapy, Prevention of Mother to Child Transmission “Option B-Plus” (lifelong antiretroviral treatment for all expectant mothers, regardless of CD4) and treatment for serodiscordant couples. Momentum and science was on our side, but at the 11th hour late in the year, a combination of senior government officials and donors as well as grassroots PLHIV groups who had not yet been informed or had not internalised the game-changing benefits of earlier initiation and treatment as prevention unexpectedly derailed parts of the planned treatment guideline updates that most had expected to sail through.

This disappointing setback was doubled when the media started reporting on very steep cuts in PEPFAR funding for Kenya. How could Kenya double its own numbers on treatment in the face of 44% cuts in PEPFAR support? How could PEPFAR ever get to six million by 2013 if one of its best performing countries was facing gigantic cutbacks?

For more than a month, confusion reigned, and efforts to reinstate PMTCT Option B+ stalled.

Until news broke that PEPFAR itself was sitting on billions of dollars of unspent money, with by-far the largest portion slated for Kenya. Rather than productively using the funds gained as a result of orphan programmes, cheaper generic medicines and the move away from expensive international NGO implementers to more efficient local partners, The Office of the Global AIDS Coordinator spent months trying to bury the story to avoid embarrassment. Once exposed, PEPFAR attempted to spin these years of unspent funds as a routine “pipeline” of cash providing a cushion against uncertainties in U.S. appropriations cycles, stock-outs and other emergencies at the country level.

Health GAP got early word about the unspent billions from the U.S. Office of the Global AIDS Coordinator and moved quickly to mobilise civil society and the Government to demand that these funds be freed up to use in Kenya for updated ART guidelines and the accelerated ART enrollment needed so that both USG and GOK could meet their new HIV treatment targets. A rapid series of meetings were held at the NACC and NASCOP (National AIDS and STI Control Programme) a well as a demonstration at a joint meeting by the Governments of Kenya and the United States on health and ‘Vision 2030’. The demonstrations and media attention led to two intergovernmental and interministerial meetings between GOK, USG and Kenyan civil society, both in Kenya and in the U.S. during the international AIDS Conference.

After the Health GAP-organised high-level GOK-USG meeting during the AIDS Conference in DC, US$500 million was freed up by PEPFAR and made available to the Government of Kenya to rollout PMTCT B+ on a nationwide basis, as quickly as possible.

Closing the Deal: Winning Treatment for All in Kenya Under a New Government in 2013

In light of upcoming elections in the 1st half of 2013, and previous setbacks in updating national ART guidelines, Health GAP and partners, with strong support from AVAC Prevention Advocacy Fellows embarked on a series of teach-ins and consultations across the country to train grassroots people on the benefits of earlier treatment and treatment as prevention, and to learn what PLHIV in Kenya want to demand from candidates for office during election season--and the next government.

These consultations in the first half of 2012 produced a PLHIV Manifesto of demands, while also preparing groups of activists across Kenya to visibly demand their PLHIV Manifesto from candidates during campaign rallies, candidate radio and TV programmes, town halls and other public meetings held by candidates and other government policy makers.

In addition to being a noisy, visible presence during campaign events, Health GAP and allies are meeting with many of the leading political parties to educate them on the political and public health benefits of adopting the PLHIV Manifesto in their own party manifestos.

By ‘birddogging’ election candidates by putting them on the spot and demanding responses at public meetings while continuing insider advocacy campaigns, Health GAP and its allies will push the new government of Kenya for the accelerated scale-up scenario in PEPFAR’s new “Blueprint for an AIDS Free Generation”and extend AIDS medication to everyone below 550 CD4--moving towards treatment on demand for all people with HIV.

In addition, we will mobilize grassroots networks to monitor the pace of rollout of PMTCT Option B-Plus in Kenya to make sure that all hard-hit regions of the country are implementing B+ before the end of the year. We will ensure that the policies that impact PLHIV in Kenya reflect the grassroots demands in the PLHIV Manifesto, including inserting CSO representatives and the Manifesto’s demands into PEPFAR’s upcoming Country Operational Plan, as well as new Global Fund applications, and the expected updates to Kenya’s National AIDS Strategic Plan and the PEPFAR Partnership Framework that will start to be drafted by the end of the year.

Relentless pressure by civil society groups have successfully pressured the Government of Kenya to deliver on commitments for major increases in domestic health spending, but the Government of Kenya still spends far too little of its own money directly on HIV, and too many fragmented Ministries compete for slices of the pie rather than working to efficiently to bring health to all. Kenya’s health system is reeling under the impact of rapid ART enrollment, and patient loss-to-follow-up rates are unacceptably high.

Only grassroots campaigns targeting the government and development partners like PEPFAR will be able to sustain the progress made so far. Kenya and Zambia are the only two low-income, high-prevalence countries that have crossed the epidemiological ‘tipping point’ where more people are added on treatment each month than are newly infected. If the current pace of rapid ART enrollment is sustained in Kenya, new infections can be slowed to a trickle before the end of the decade, according to modeling by the U.S. Department of State contained in the Blueprint for an AIDS Free Generation. Kenya already leads the region in ART enrollment and domestic health spending, but more must be done. 2013 will see Health GAP and allies continue campaigns for updated ART guidelines and increased national budget commitments for AIDS treatment.