Fund the Fight Against Global AIDS

We have all of the resources necessary to end the global AIDS epidemic by 2030. We just need the political will to do so.
To put us on track, the US must scale up PEPFAR funding $700 million each year for the next three years and continue to contribute one-third of the Global Fund to Fight AIDS, Tuberculosis, and Malaria. By doing so, we could see the number of people receiving treatment nearly double to 30 million by 2020, effectively putting us on track to end the pandemic by 2030. 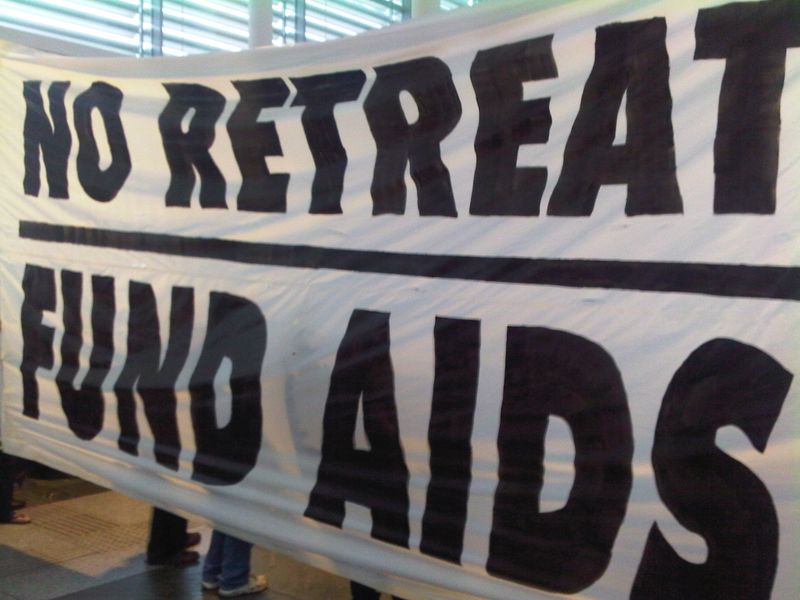 We know how to end the AIDS epidemic by 2030, if we choose to. New evidence shows that starting HIV treatment immediately upon diagnosis is the most effective ways to prevent HIV transmission in communities. In order to get ahead of the epidemic, we need to raise the number of people in treatment from 18 million to 30 million by 2020. What we do in the next 4 years will set the course to either end AIDS or allow the epidemic to continue spreading.

This goal will only be met if the human right to access to treatment immediately upon diagnosis is realized. However, a report from Health GAP and partners around the world, "Towards Treatment on Demand for All" shows that fewer than 1 in 10 people with HIV live in a country where treatment is provided to everyone immediately upon diagnosis. We have the science, we have the ethical imperative, and we have the ability to provide treatment on demand for all.

To achieve this, we need a $2 billion increase in annual US global AIDS funding by 2020.

Since 2010, the US budget for global AIDS has declined hundreds of millions of dollars. UNAIDS estimates that there is a $7 billion annual gap in the amounts needed by 2020 to meet global targets to end AIDS as a global public health threat by 2030. A $2 billion increase in US annual funding is necessary to help close this gap. Without increasing funding from the US, and other donor countries, to scale up treatment, we will fall behind and lose the chance to get ahead of the epidemic.

HOW DO WE FUND THE FIGHT?

The American people support the fight against global AIDS primarily through two funding mechanisms, PEPFAR and The Global Fund to Fight AIDS, TB, and Malaria (or ‘the Global Fund’ or ‘GFATM’). There are also smaller amounts for other agencies including the State Department and the Department of Health and Human Services, but our advocacy focuses on the PEPFAR bilateral programs and the Global Fund, our best and biggest tools.

The President’s Emergency Plan for AIDS Relief (PEPFAR) was created in 2003 by President Bush after an activist campaign to win a multi-year commitment to fund global AIDS programs. Through PEPFAR, the American people support the fight against global AIDS through bilateral and regional programs in 65 countries. As a result of this commitment, PEPFAR is supporting life-saving antiretroviral treatment for 11.5 million men, women, and children.

Health GAP works with developing country activists to identify bottlenecks to effective use of PEPFAR funds or to highlight detrimental effects of reduced funding at the local level. We then pressure US elected officials and the Administration to increase support and work to undo bottlenecks. Health GAP also works to identify problems with the Country Operational Plans that provide guidance to countries on how to use PEPFAR funds.

The US allocated $4.32 billion for PEPFAR bilateral programs for 2016. This is the amount also allocated in the 2017 appropriation, which has not yet passed. If this flat-funded amount does pass, we will need an increase of $700 million for 2018, and equal increases in 2019 and 2020, in order to gradually meet a $2 billion annual increase.

The Global Fund to Fight AIDS, TB, and Malaria is a partnership founded in 2002 between governments, civil society, the private sector and affected communities. It is a multilateral program, with funding received from more than one donor, and currently supplies about $4 billion per year. The Global Fund supplies commodities and technical assistance via country grants for a broad network of health and development organizations on the ground.

Health GAP works with AIDS and health activists in developing countries such as Uganda, Kenya, Nigeria, Zambia and others to wage campaigns that pressure their governments to strengthen proposals to the Global Fund, use the money more efficiently and increase civil society participation. In addition, we work on campaigns to increase local government investment in the fight against AIDS.

HOW DO WE WIN?

President Trump released his budget request on March 14, 2017. Congress actually makes the budget, and Global AIDS funding is determined by the State and Foreign Operations (SFOPs) appropriations sub-committees in both the House and Senate. There are various key times when you should advocate to have your Members of Congress to ask for:

For both funding streams, Health GAP is constantly working with grassroots AIDS activists and students around the United States to provide constant pressure to elected officials who determine the funding amounts from the U.S. for both PEPFAR and the Global Fund.To get involved in Health GAP's Fund the Fight campaign, please sign up on our Stay Connected page and feel free to contact the Health GAP staff working on appropriations:

DOWNLOAD our 'Fund the Fight' leave-behind packet to bring to legislative meetings.

Check out our past action alerts & other news about the Global Fund and PEPFAR.

Go here to see the Dear Colleague letter for FY 17