Presidential Candidates: Don't Pull the Wool Over Our Eyes on HIV Funding 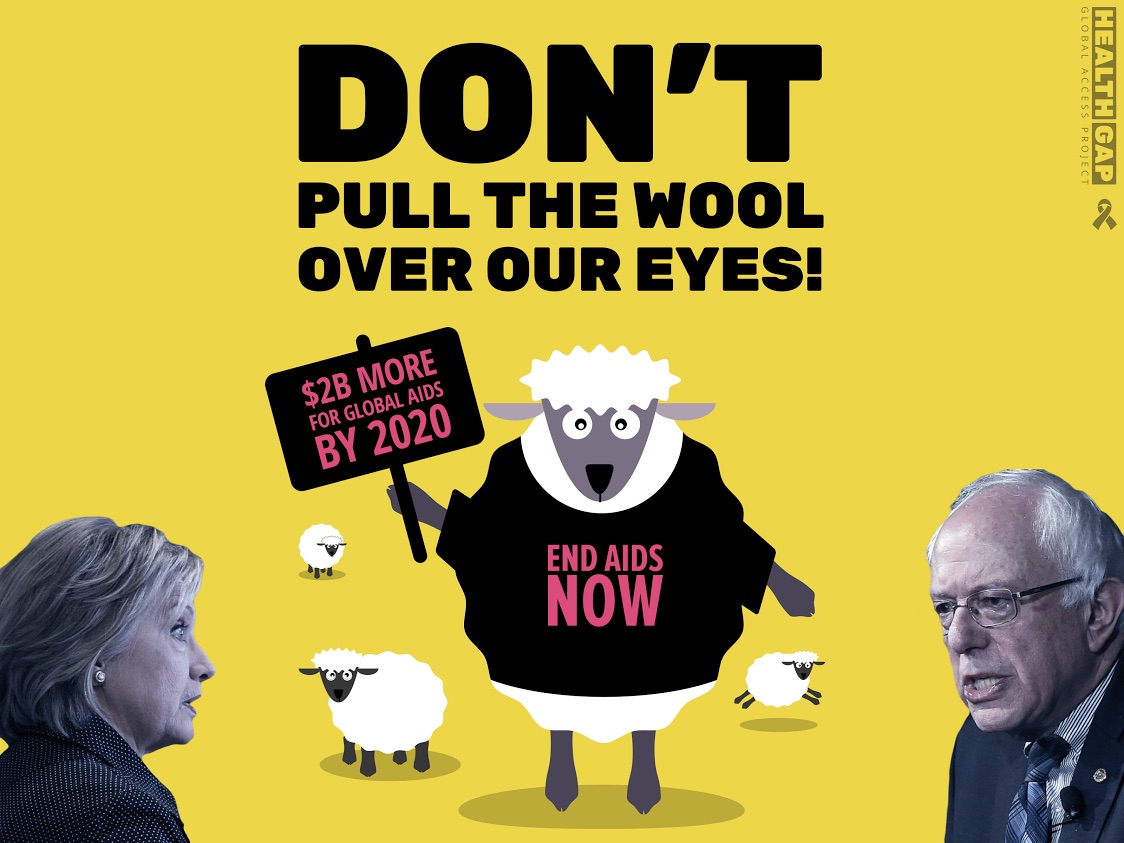 With the New York Primaries happening today, both Bernie Sanders and Hillary Clinton have been campaigning all over the state— and both have disappointed AIDS activists. Neither candidate could find time to schedule a meeting with us, as requested months ago, before the April 19th vote.

Last week, a coalition of AIDS activists - including Health GAP - pressured both campaigns to stop ignoring people living with HIV and their allies and meet with us. To their credit, these meetings have been now been scheduled - but not until May, well after the New York primary is over.

Both Sanders and Clinton have failed to make the commitments to HIV/AIDS issues that should be required of the next president of the United States - and AIDS activists should not be assuaged until they do.

Clinton’s record with HIV/AIDS is lauded among some AIDS activists, many who recall compassionate responses to people living with HIV during her time first as First Lady of Arkansas, then the United States, and then as the Senator from New York.  As Secretary of State, she was responsible for the PEPFAR program, and introduced the PEPFAR Blueprint which laid out a clear road-map for creating an ‘AIDS-Free Generation’ globally.  When Clinton made an off-color statement about “Nancy Reagan’s low-key AIDS advocacy”,  it left some activists wondering just how invested Hillary Clinton is in ending the epidemic, and how much political grandstanding she is willing to engage in to reach the Oval Office.

Sanders has less of a record with HIV issues - but he has longstanding support for the LGBT community, voting against “Don’t Ask Don’t Tell” in 1993, and against the “Defense of Marriage Act” in 1996, long before Clinton went public with support for same-sex marriage in 2013. Sanders has long championed reforms to intellectual property and the influence of the pharmaceutical lobby in government, which would increase access to affordable medications by lowering the prices of prescription medications. Most recently, Sanders has been an outspoken opponent of the Trans-Pacific Partnership which would drastically inhibit global access to generic medicine used to treat and prevent HIV/AIDS. Additionally, he has been a longstanding supporter of the creation of a financial transaction tax on wall street - or a Robin Hood Tax - which would generate the money we desperately need for global AIDS programs.

Democratic presidential candidates know they can’t win the New York Primary without the votes of the LGBT community, but how much of this political grandstanding is beneficial to the communities who are affected by HIV/AIDS down the road? AIDS activists aren’t sure.

There are two big components missing from Clinton and Sanders’ HIV/AIDS platforms - a promise to end the epidemic in the U.S. by 2020, and a funding increase of $2 billion to global AIDS programs by 2020 in order to achieve UNAIDS’ goal of putting 30 million people on HIV treatment by 2020.

This makes both platforms very weak. If Clinton and Sanders won’t commit to these goals, how strong is their conviction to alleviate the barriers to achieve an AIDS-free generation?

Since 2004, presidential candidates from BOTH parties have consistently included strong commitments to funding for global and domestic AIDS programs in their platforms. In 2008, both Hillary Clinton and Barack Obama committed to investing $50 billion in global AIDS programs over 5 years. (An important note: while this blog post focuses on the democratic primary in New York, it must be pointed out that not a single Republican candidate has made any commitments to the AIDS response this year - in stark contrast to the republican support for HIV programs in past election cycles).