“A lot of people in Washington like to talk about reducing the debt and deficits. Well if you really care about reducing the deficit, how about asking Wall Street speculators to pay their fair share?” Ellison said. “This bill will add a tax of a fraction of a percent on transactions made by the same Wall Street firms and stock traders who crashed our economy in 2008. This tax alone will generate up to $300 billion a year in revenue, stabilizing the deficit and allowing us to invest in the things that matter—education, roads and bridges, and health care for our seniors and veterans.”

The tax would reduce harmful financial market speculation, discourage high-volume, high-speed trading, and slow down the proliferation of ever more complex derivatives.

In 2011, 40 countries had a similar tax, as did the U.S. until 1966. A financial transaction tax has been recommended by business leaders and economists including Bill Gates, Warren Buffett, Paul Krugman, Joseph Stiglitz, Jeffrey Sachs, Robert Pollin, and Larry Summers. After the 1987 Wall Street crash, a financial transaction tax was endorsed by Bob Dole and President George H.W. Bush.

You can find photos from the press conference here. 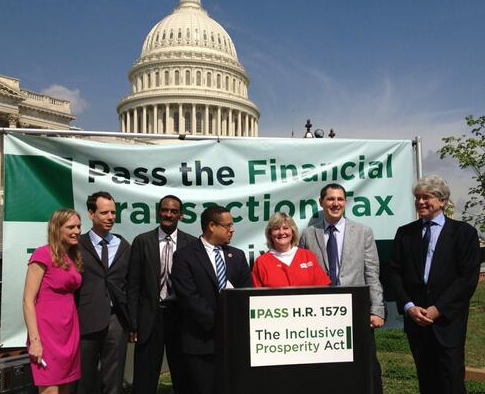