AIDS Doesn't Take Spring Break and Neither Can Its Funding

Nearly Naked Student AIDS activists took over Senate Majority leader Harry Reid’s office to protest funding cuts to global AIDS programs on Thursday, March 21, 2013. The students from schools including City College New York, Columbia, Harvard, Iowa State and Yale are members of the Student Global AIDS Campaign skipped the trip to Cancun in order to spend their Spring Break demanding full funding to fight AIDS, including the passage of a Robin Hood Tax, a tiny tax on big banks that could raise $350 billion each year.

Three female students wore bikinis and painted slogans on their bodies instead of holding signs. Six others joined them clad in beach attire, with slogans painted on their tank tops: “AIDS Cuts Kill”, and “Fund PEPFAR, Fund Global Fund, Robin Hood Tax to end AIDS.” The students completed their beach party with a rendition of the hit song “Call Me, Maybe”, entitled “Fund AIDS, Harry”. These protestors were nearly naked, following in the footsteps of naked AIDS protestors who took over Speaker Boehner's office in November.

The stunned staff did appear to hum along to the catchy tune.

The beach party, which included a beach ball and frisbee, occurred days before the spring congressional recess begins.  “We came here today to remind Senator Reid of the importance of funding lifesaving global health and AIDS programs. As Senate Majority Leader, Mr. Reid has a responsibility to ensure that the United States meets it’s commitment to ensure the end to AIDS that has been outlined by former Secretary of State Hilary Clinton and President Obama,” said Lily Ostrer from Harvard University.

In May of 2011, the U.S. funded study, HPTN 052 proved that HIV treatment works as prevention, and that the world could see the end of the AIDS pandemic if a small number of people were put on treatment around the world.

“We have a small window of time to get ahead of the pandemic.  If we invest enough money into treatment and prevention during this window, we will see the end of the AIDS pandemic in less than 30 years. The United States Senate and Congressional leaders need to remember this when deciding on budget priorities during both the current Continuing Resolution for FY13, and for the FY14 budget process,” said Iowa State Student, Deepak Premkumar.

"The excuse that there's no money to end the AIDS pandemic is a lie," said Bryan Edwards of City College NY.  "If Congress passes a Robin Hood Tax we would have enough money to end AIDS, with lots left over to stop student debt, fight climate change, and provide jobs."

‘The students are campaigning in support of a Robin Hood Tax rate of .5% with a commitment to have that money used to save lives at home and abroad, provide jobs, strengthen education and fight global climate change.

There are currently 34 million people living with HIV/AIDS across the world, and only around 8 million of them are receiving treatment. The disease has already claimed over 30 million lives. The sequestration cuts recently passed signed a death sentence for 37,000 people living with AIDS in this year alone.

The Naked AIDS activists who took over Congressmember Boehner’s office in Novemeber are expected plead guilty to a misdemeanor and have been complying with their order to stay away from the Longworth Office building. As the weather warms up, and Congress continues budget cuts instead of increasing revenue with a Robin Hood Tax, expect more and more AIDS activists to shed their clothes. 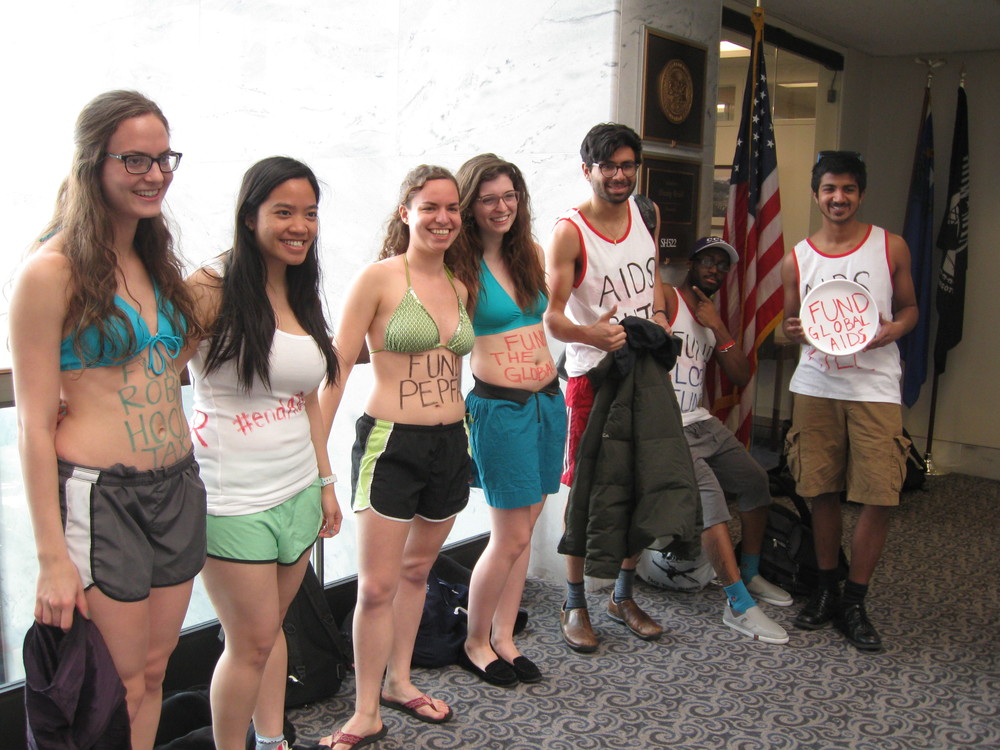